The postdoctoral research project of Carolina Carvalho, School of Public Health, São Paulo University, supervised by Prof. Dr. Leandro Giatti, participatory mapping to map socioenvironmental important issues in the city of Guarulhos, São Paulo, Brazil. Guarulhos has 319 km2 of area, a Human Development Index (HDI) of 0.763 in 2010, considered high according to official data (lowest is 0 and maximum is 1). It also has a population of 1,221,979 inhabitants, suffering with many socioenvironmental impacts due to uncontrolled urbanization process and inefficient governance, such as lack of basic resources (e.g. water), pollution and deforestation.

The main motivation of this research is to catch citizen´s perception about these socioenvironmental issues that impact their daily lives. Uncontrolled urbanization and an inefficient and not inclusive governance model are the basic problems. Therefore, the need for an innovative approach that allows social participation also motivated this project, and the use of participatory mapping, which was developed in two general stages:

The first stage: From April to June 2017, the course “Geographic Information Systems (GIS) for environmental health” was given to high school students, who attended the activities of the local NGO Clube de Mães, in Novo Recreio, a peripheral community inserted in a context of high socio-environmental vulnerability. The participants developed a participatory mapping of the community, marking variables such as access to energy, water, fresh food, street paving, inadequate waste disposal spots, and occurrence of landslides and floods. Along with this mapping, other participatory activities were carried out, such as sketch maps, community journals, and integrated panels (aiming co-creation of strategies and solutions to the discussed problems).

The map served to contextualize the area where they live, making participants observe that there is a large area of ​​environmental preservation around them, that there is availability of water resources despite the situation of water shortage in the city, basic resources are really being mismanaged, etc. The following is the result of the mapping. 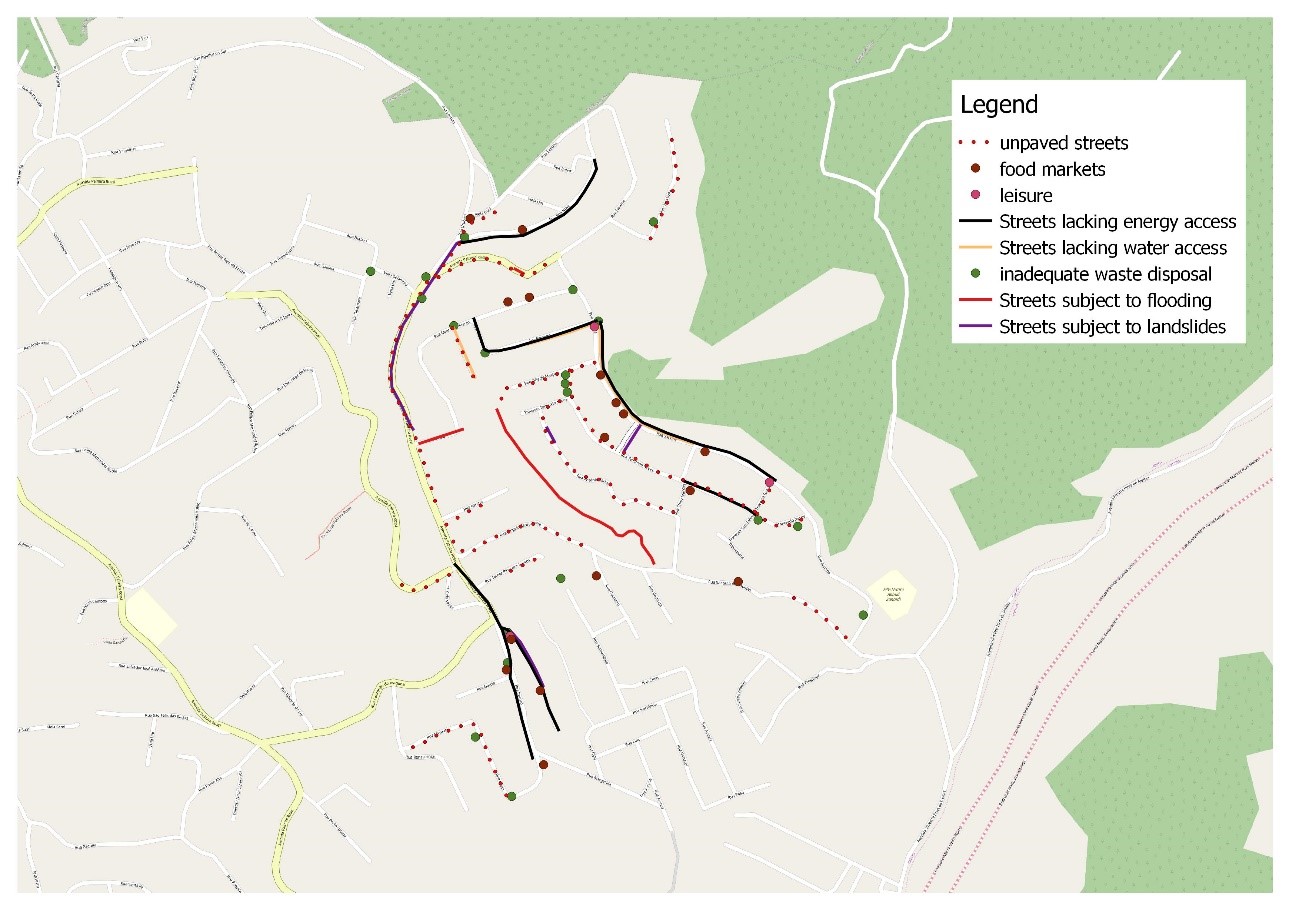 With this mapping, sites with serious socioenvironmental issues were mapped, such as those with potential for landslides/flooding and waste disposal, or areas with cumulative problems, that represents a risk to the health and safety of local dwellers. These are only two examples of what dwellers face daily. After the mapping, participants produced journals to communicate to the neighborhood their findings and propose solutions to overcome the problems. The discussion was a rich process, that promote empowerment and awareness among them.

The second stage: After the participatory mapping in Novo Recreio, this research evaluated the citizens’ perceptions of socionenvironmental problems in Guarulhos. This was done through a survey, elaborated with Maptionnaire, with questions that addressed aspects of the elements of urban nexus, water, energy and food, which are the basis for the citizen’s quality of life and well-being. The survey was answered by 504 citizens and was possible to map problematic areas with lack of water, energy and food, as well as proposals for places for urban gardens and even new public transport routes (Figure 3). It was an excellent opportunity for social participation that the citizens had, to share their perceptions and feelings about the city. Responses are being analyzed at the moment, but it is already possible to make some important observations, such as areas where the lack of water and energy is greater and cumulative (Figures 4 and 5). Besides, a vulnerability analysis with citizen data are being carried out. 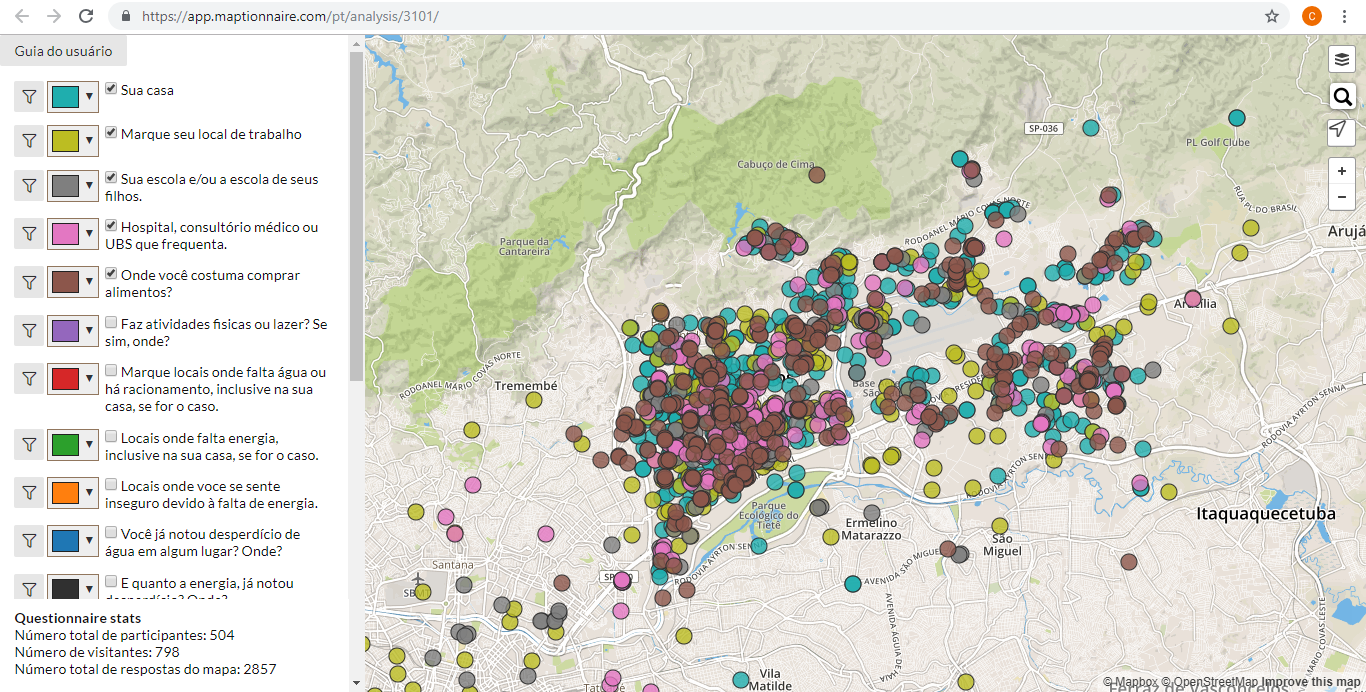 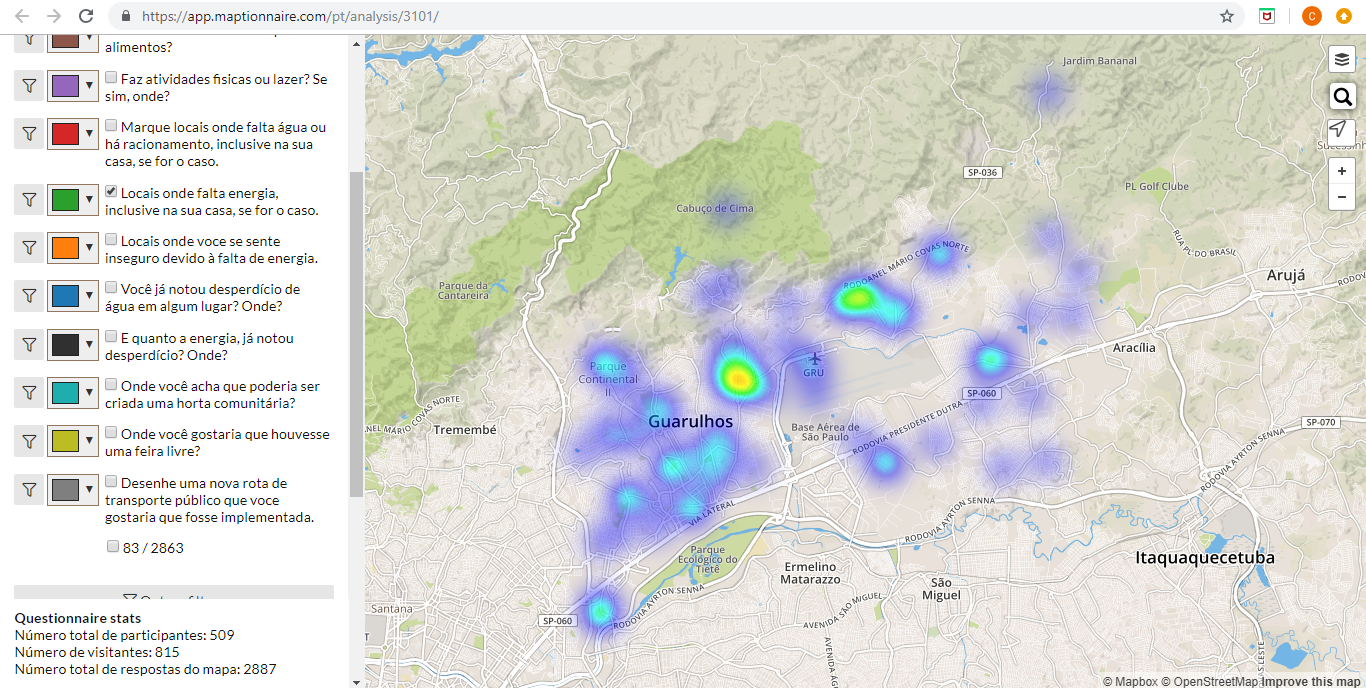 Fig 4. Areas with lack of energy. 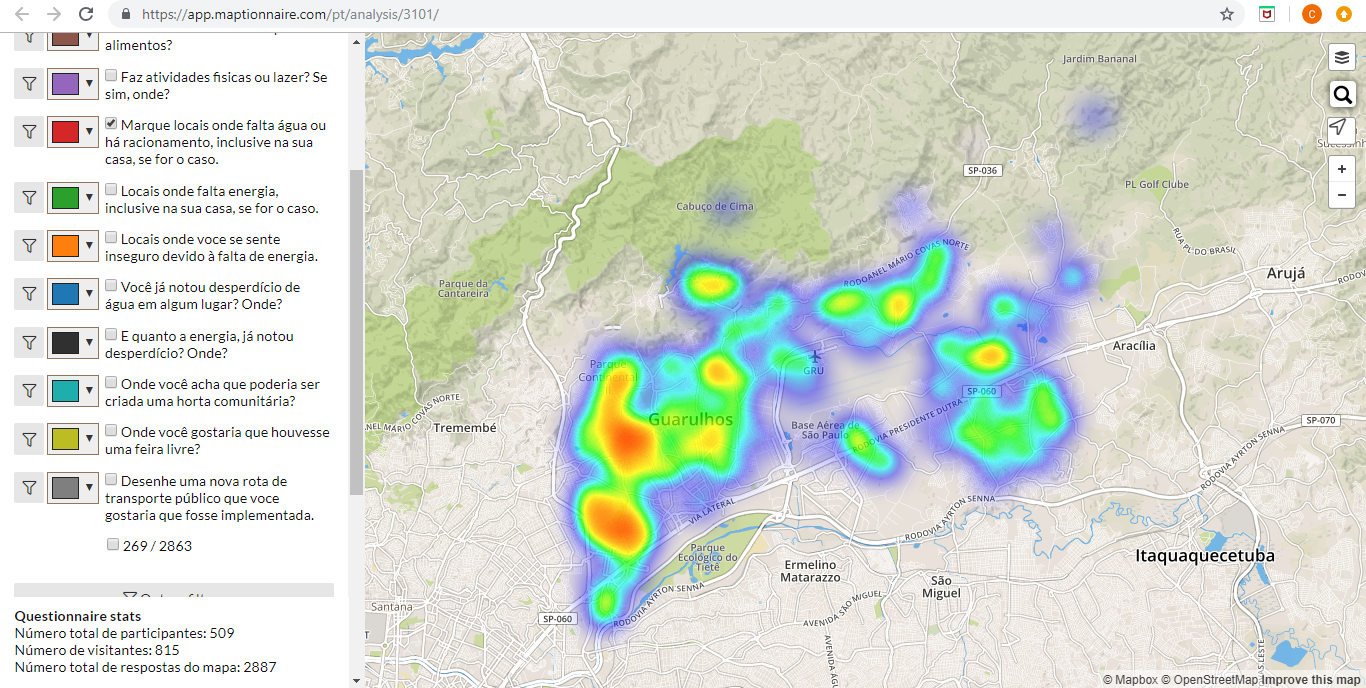 Fig 5. Areas with lack of water.

Soon complete results of this research will be released on the research blog: https://sigparticipativo.wordpress.com/