Cross-posted from the Mapbox blog

Maptionnaire is a survey tool built by Mapita that allows cities from Denver to Helsinki to create easy and effective public participation in the urban planning process through web-map surveys. The Mapita team was recently at the International Society for Participatory Mapping conference in Finland, where I caught up with Festa Isufi, Mapita’s community engagement advocate. 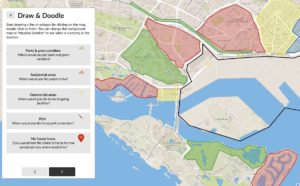 What is Maptionnaire?
Maptionnaire is a blend of a ‘map’ and ‘questionnaire.’ It was initially developed by researchers at Aalto University in Finland to provide an interactive, map-first community engagement tool that could bridge the gap between city planners and residents. Interest from cities and urban planners grew rapidly and in 2011 the team decided to form Mapita as a company that could scale Maptionnaire into a tool that could support the demand. 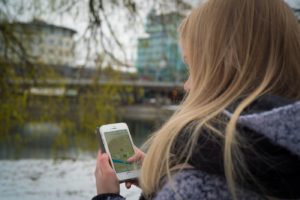 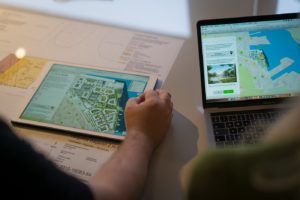 What drove you to create Maptionnaire?
Effective and equitable city planning needs participation from a broad and diverse group of actors, but it can be very logistically difficult and inefficient to gather this input. Conventional methods for public engagement, such as community meetings, often have low participation from certain demographic groups like younger residents, families, or ethnic minorities and meetings are often dominated by individuals who strongly oppose a project.

We created Maptionnaire to complement the existing participation methods with quick and robust ways to engage wide audiences. People can share their input on city planning projects from wherever they are, through any device, without having to install an app. Although digital tools are now widely used in city planning processes, when we started many planners were reluctant to trust new engagement technologies. Now, we can show them how Maptionnaire makes participation fun and produces a set of data that is geo-located and easy for planners to use and understand. 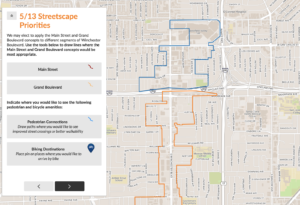 Why make this a map-based tool?
We wanted to have users interact primarily with map interfaces because this is inviting and intuitive for general audiences, while still allowing city planners to share their plans and technical data. It was important that the maps be flexible enough for planners to be creative with them, yet also perform reliably so that users would not be frustrated by it. Map-first interaction is one of the core features that sets Maptionnaire apart from other engagement methods.

How is Maptionnaire being used now?
People are using Maptionnaire around the world. Anyone who needs public input to a planning process or research project can simply sign up and start creating questionnaires. The tool is designed to be easy to use for people who are not geospatial experts but have ideas to contribute to the physical spaces and planning of their communities.

Once data is submitted, it can either be analyzed online through our in-built analysis tool or it can be exported as a spreadsheet or shapefile and then imported to other geospatial analysis tools for further analysis or data visualizations. 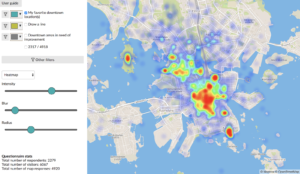 Why do you use Mapbox?
When we started, having the ability to easily integrate with Leaflet and totally customize the look of the maps made Mapbox the obvious choice. We mainly use Mapbox to provide us with unique and engaging map styles, but we occasionally use Mapbox to create custom tilesets of geo-referenced images and topographical map layers.